Big Detroit Ice-In and Ice-Out Trends are important to our LDA Members. As we receive more information to help you make informed decisions, we will post. Below is an informative Ice Cover Duration chart from 1911-2020. 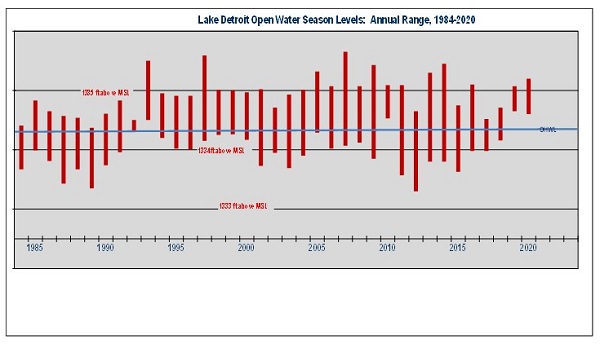 Summer Lake residents may be forgiven for not fully appreciating the wonders and values of the ice that covers Detroit Lake for an average of five months per year. For many decades the harvest of ice was significant enterprise for the Detroit Lakes area. Then as now, this ice-covered lake is the basis for an array of popular wintertime activities such as snowmobiling, skating, and fishing for local residents and tourists. Elaborate winter ice-oriented events, snowmobile touring and racing, fishing contests, ice-sculpture, Polar Fest, bring many visitors to Detroit Lakes. Of great importance, the thickness and duration of ice-cover plays a role in lake ecosystems by affecting the health of fish populations and the plankton and nutrient levels in the following open-season.

So it should not seem strange that the arrival and departure of lake ice has been of local interest for native Americans and the Europeans that followed them. For Detroit we have been able to accumulate a record of some ice-related observations stretching back to 1893. These data have been compiled by various observers, and were usually considered newsworthy events in local newspapers . (We are especially indebted to Ralph Anderson, a long-time reporter, who was especially diligent in assembling the ice data for Detroit Lake).

There is reason to doubt that observers applied consistent standards over all the years of this record. For example, it is likely, even reasonable, given the status of roads, to assume that many early observations were based upon Little Detroit which tends to freeze and thaw a bit earlier than Big Detroit. Nevertheless the record is remarkable and gives a reasonable indication of the patterns over time. And modern observations are probably more consistent, based upon criteria suggested by the state, and are based upon big Detroit.

Since 1993, the following standard has been employed for determining what is the lake’s freeze-up date: when the entire lake is skimmed over by ice (regardless of thickness) and remains so for the rest of the winter. In this situation the minor areas that may open up because of warm conditions or winds are ignored. These criteria are more or less the standard used by observers in other parts of the country.

Fixing ice-off dates is a little more complicated because the melting process tends to be more gradual. The standard widely suggested by ice observers is adhered to here - when the lake is "substantially" ice-free (90% or more) it is considered melted. Hence there still may be some floating ice or some wind-driven piles of ice along some shorelines after the official “Ice-Out” date.

Has the ice situation on Detroit Lake changed over the years?

Taking the available data, and given the data limitations described above here are some points to ponder:

The full set of ice dates is updated semi-annually, and is available on the PRWD website: prwd.org/files/1115/8412/6242/Detroit_Ice_History_web_page.pdf 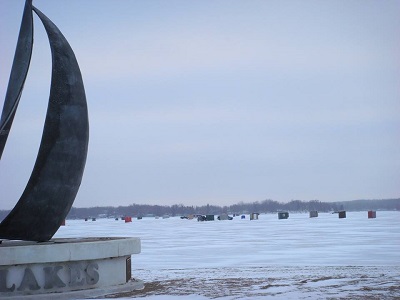